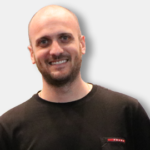 Giacomo Arcaro is a European growth hacker and CMO of Blackchain International, a consulting firm helping with blockchain projects and social media promotion. Mr. Arcaro admits he was initially reluctant to get into the blockchain space. Arcaro's first contact was with a company who wanted him to help them create a token but they wanted to pay him in that token, so he passed. Three months later they sent him financial statements that made him second guess his decision and he began to seriously investigate the blockchain space. He dove right in and moved to Switzerland’s Crypto Valley, and while the timing in December 2017 wasn’t the best, he saw enough to know the future for many would be in the blockchain. With partners Eloisa Marchesoni and Giovanni Casagrande he started Blackchain International, a company that advises clients on how to move their business to the blockchain and conduct ICOs.